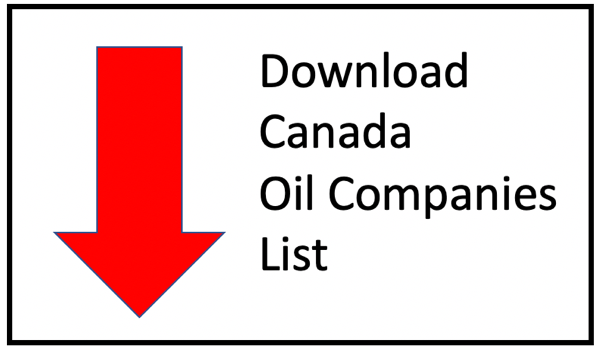 Canadian Natural Resources Canada oil companies has exploited Canada’s resources to become one of the country’s largest natural gas producers. The company has large oil holdings (light, medium, and heavy crude assets) in British Columbia and Alberta, as well as in Saskatchewan. It also has holdings in the North Sea and offshore West Africa. In addition, the company has major interests in oil sands production in Canada. In 2010 Canadian Natural Resources reported proved reserves of 3.8 billion barrels of oil, bitumen, and natural gas liquids, (including 1.9 billion barrels of synthetic crude oil), and 4.3 trillion cu. ft. of natural gas, and produced an average of 632,000 barrels of oil equivalent per day.

Horizon Oil Sands include a surface oil sands mining and bitumen extraction plant, complemented by on-site bitumen upgrading with associated infrastructure to produce high quality SCO. In late 2017, the Phase 3 expansion was completed at Horizon, the final step in the Company’s transition to a Long Life Low Decline asset base. In 2020, the Company is evaluating opportunities to increase reliability, lower costs and add production growth in the near and long-term.

Albian Sands Energy Inc. is the operator of the Muskeg River Mine and Jack Pine Mine, an oil sands mining project located 75 kilometres (47 mi) north of Fort McMurray, Alberta, Canada. It is a joint venture between Shell Canada (10%), CNRL (70%) and Chevron Canada (20%).

Kirby – Canadian Natural commenced steam injection at the Kirby South Phase 1 project in September 2013. Kirby South operations are located approximately 85 km northeast of Lac La Biche. This is the first project that we have undertaken in the Athabasca Oil Sands area. The project targets the McMurray reservoir and uses Steam Assisted Gravity Drainage (SAGD) technology for the recovery of bitumen from the in situ oil sands resources.

The project includes a central bitumen processing facility with production capacity of 40,000 bbl/d of bitumen.

Canadian Natural began construction of Kirby North, shortly after receiving regulatory approval in May 2014. Kirby North operations target the McMurray reservoir and will employ SAGD technology for the recovery of bitumen. In the first quarter of 2015, the Kirby North project was deferred due to the fall in commodity prices. In 2016, the Company worked through the Kirby North construction process and its targeted drilling plans in order to ensure cost savings identified could be captured. In late 2017, the Company reinitiated the Kirby North project with planned construction and well-pair drilling in 2018 and 2019. A result of top tier execution and strong productivity, the project achieved first oil in Q2/19.  The ramp up of Kirby North is ahead of schedule and has been top tier with July 2020 production averaging approximately 43,200 bbl/d, exceeding the nameplate capacity of 40,000 bbl/d.

Primrose & Wolf Lake In the Cold Lake deposits, our Primrose operations currently produce from the Clearwater reservoir using the cyclic steam stimulation (CSS) process. CSS uses a single well bore to inject and produce steam. This technology has been historically applied to reservoirs that have barriers to vertical flow. The production peaks and troughs at Primrose are a reflection of the cyclic steam process – the peaks are associated with production cycles from newer, less mature wells and the troughs are associated with production cycles from the more mature areas in the field.

Cenovus Energy Inc. is a Canada oil companies that is integrated oil and natural gas company. It is committed to maximizing value by sustainably developing its assets in a safe, innovative and cost-efficient manner, integrating environmental, social and governance considerations into its business plans. Operations include oil sands projects in northern Alberta, which use specialized methods to drill and pump the oil to the surface, and established natural gas and oil production in Alberta and British Columbia. The company also has 50% ownership in two U.S. refineries. Cenovus shares trade under the symbol CVE, and are listed on the Toronto and New York stock exchanges.

Crescent Point is upwardly revising its 2021 annual average production guidance to 130,000 to 134,000 boe/d, up from 128,000 to 132,000 boe/d. This reflects the Company’s continued operational outperformance and the reactivation of higher cost production that was previously shut-in during a lower commodity price environment. Crescent Point is also narrowing its 2021 development capital expenditures guidance, within its prior range, to approximately $600 to $625 million.

Baytex Energy Corp. Canada oil companies is an oil and gas corporation based in Calgary, Alberta. The company is engaged in the acquisition, development and production of crude oil and natural gas in the Western Canadian Sedimentary Basin and in the Eagle Ford in the United States. Approximately 83% of Baytex’s production is weighted toward crude oil and natural gas liquids. Baytex’s common shares are traded on the Toronto Stock Exchange and the New York Stock Exchange under the symbol BTE. Baytex Energy Playbook

In 2021, we are benefiting from our diversified oil weighted portfolio and our commitment to allocate capital effectively. Based on the forward strip(1), we expect to generate over $350 million of free cash flow in 2021.

Whitecap Resources Canada oil companies is a Canadian public oil company based in Calgary, Alberta, with operations in Alberta, Saskatchewan, and British Columbia. Whitecap is an oil weighted growth company that pays a monthly cash dividend to its shareholders while being recognized for storing more CO2 annually than we emit corporately. Whitecap Resources Playbook

Whitecap’s second quarter results were exceptional across all areas of the business, achieving record production of 116,799 boe/d which was 4% above our forecast of 112,000 boe/d, on capital investments of $39 million, which was approximately 30% below our forecast of $55 – $60 million. The record production in the second quarter includes 153 MMcf/d of natural gas, which is expected to increase as we continue to grow our Montney production in the second half of the year and in 2022. Our second quarter funds flow netback of $25.07/boe was 15% higher than the first quarter and resulted in funds flow of $267 million ($0.43 per share). Funds flow per share increased 126% compared to the prior year quarter and 19% compared to the first quarter of 2021.

We highlight the following second quarter financial and operating results:

With the NAL, TORC and the Kicking Horse acquisitions closed, Whitecap’s sustainable business model is now even stronger. Disciplined acquisitions that enhance our per share metrics and improve our free funds flow profile are an important part of our strategy and we will continue to evaluate these opportunities.

Teine Energy Canada oil companies is the Viking’s largest producer, with thousands of low-risk, repeatable drilling locations identified on our 800,000 net acres of land. This accounts for about one-third of all Viking production. Our activity in Viking – approximately 3,600 horizontal locations – represents over 15 years of drilling at current activity levels and positions Teine to continue expanding profitability through efficiencies in cost structure, increasing well productivity, and improved reservoir recovery.

Ovintiv Canada oil companies has a multi-basin portfolio with scale, anchored by large, contiguous positions in the heart of the Permian and Anadarko basins, and the Montney. Ovintiv Playbook

“Our track record of free cash flow generation continued in the second quarter with another $350 million of free cash, bringing us to a total of $890 million year-to-date,” said Ovintiv CEO, Doug Suttles. “We also expect to reach our original $4.5 billion net debt target before year-end – one year ahead of our original timeline. This achievement will mark almost $3 billion of net debt reduction since the second quarter of 2020. Our business continues to perform exceptionally well with operational efficiency gains and supply chain management more than offsetting cost inflation year-to-date. Ovintiv is positioned to thrive on the road ahead.

Permian drilling and completion (D&C) costs have averaged $480 per foot year-to-date and are 11% lower than the 2020 program average.  Both drilling and completion efficiency records were achieved in the quarter, including an average drilling cost of $170 per foot, 17% lower than the 2020 average. Among wells rig released in the quarter, the average lateral length drilled was 12,050 feet, approximately 20% longer than the 2020 average. Underpinned by Simul-frac operations, the Company completed 3,500 lateral feet per day and pumped 9.5 million pounds of sand per day on a single pad, its most efficient well set to date. During the quarter, 30 out of the 33 net wells were completed using Simul-frac. Ovintiv also began sourcing in-basin, wet sand from a Howard County mine during the quarter.

Anadarko
Anadarko production averaged 133 MBOE/d (62% liquids) in the quarter. The Company averaged two gross rigs, drilled 16 net wells, and had 22 net wells TIL, of which 21 were operated by Ovintiv.

STACK D&C costs have averaged $430 per foot year-to-date, and are 10% lower than the 2020 program average. During the quarter, 17 wells were completed in the STACK, with two wells drilled and completed for $3.5 million. All the STACK wells were completed using Simul-frac operations, where the Company pumped an average of 150,000 bbls per day, 40% more than the 2020 program average. Ovintiv also achieved a new spud-to-rig release drill time pacesetter of 5.9 days. The team has now recorded faster average drilling times in the STACK for the third consecutive quarter.

In SCOOP, four net Woodford/Caney oil wells were brought on-line in the quarter with an average D&C cost of $5.3 million.

Montney year-to-date D&C costs have averaged $410 per foot and are 9% lower than the 2020 program average. All the quarterly wells TIL targeted the volatile oil and liquids-rich condensate fairway of the play with an expected liquids composition of 30-70%. Ovintiv drilled five wells at or below $100 per foot, 20% of the total quarter rig releases. Six wells were drilled faster than the previous pacesetter and all six wells achieved drilling rates greater than 2,050 feet per day.

Base Assets
Bakken production averaged 24 MBOE/d (79% liquids) in the quarter. The company drilled one net well and had two net wells TIL. The two net wells brought online in the quarter exhibited strong production performance, achieving an average 60-day initial production rate of 1,235 bbls of oil per well. D&C costs from 2020 to 2021 have averaged $510 per foot, 14% lower than the 2019 average.

OPERATIONAL REVIEW
ARC’s leading position in the Montney resource play features a deep inventory of high-return, de-risked
development opportunities. The enhanced commodity and geographic diversity established through the
Business Combination provides significant optionality within ARC’s portfolio and improves the Company’s
ability to reduce development risk and mitigate the impacts of future commodity price volatility.
ARC processes the majority of its production through owned-and-operated infrastructure. This affords the
Company greater control to deliver on its low cost structure and optimal liquids recoveries, as well as the
ability to optimize revenue streams, and supports strong safety and environmental performance.

2021 Guidance
ARC’s 2021 capital budget of $950 million to $1.0 billion has been designed to maximize free funds flow
and enhance ARC’s returns-focused value proposition. While the primary focus for 2021 will be to
successfully integrate Seven Generations